Psalm 112:7  (The Voice)
They will not be afraid when the news is bad because they have resolved to trust the Eternal. 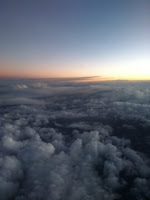 “You will lose someone you can’t live without, and your heart will be badly broken, and the bad news is that you never completely get over the loss of your beloved. But this is also the good news. They live forever in your broken heart that doesn’t seal back up. And you come through. It’s like having a broken leg that never heals perfectly—that still hurts when the weather gets cold, but you learn to dance with the limp.”
― Anne Lamott

Words pulled together in a string of sentences have the ability to shakeup lives. The sentences above did just that to me.

Feelings, stories, blog posts, conversations with God and rants have crossed my brain over the last nine months, but they refused to be permanently recorded until today.

The fact is: My heart is broken. It’s broken in a million tiny pieces that can never be put together the exact same way.

Five people I dearly love moved into eternity during the last nine months. All this happened after I broke my ankle.

One died unexpectedly. Three were terminally ill. One was murdered.
I learned about two of these deaths on the same day...

I will never completely get over the loss of my beloveds.  But like my broken ankle that will never heal perfectly, my life has continued imperfectly without them.

There’s a stark quietness that envelops my heart…I want to choke.
I want to cry out with a big, “Why?” But there is no response.

There is no answer.

And then I remember.

Popular posts from this blog

America will never be normal

January 08, 2012
When it hurts to care – Psalm 31:7
Psalm 31:7 I will be glad and rejoice in your unfailing love, for you have seen my troubles, and you care about the anguish of my soul. One of God’s gifts to me is the ability to care about and pray for those who are ill. But right now, my mother is at the end of her life, and another key person in my life recently received bad health news. I also follow the Facebook journey of a courageous 12-year old girl, Jessie Rees, who suffered from two inoperable brain tumors. She passed away a few days ago. I am sad.

But it’s interesting that in my sadness, I’ve come to appreciate how God works my faith steps. Before I decided that God’s purpose for me was greater than my own purpose, I had a hard time being close to people because it hurt that they might die or leave me. God opened my understanding (and healed me) so that I could come to terms with that and step into the gifts of compassion he planned for me. I started to feel that familiar hurt earlier this we…
4 comments
Read more

How to stay young and youthful all your life

November 26, 2017
How to stay young and youthful all your life Word of Instruction from Dr. Charles F. Stanley These are my notes from today's broadcast.
Scripture: Psalm 92:12-15
Psalm 92:
12 Good people will prosper
like palm trees,
and they will grow strong
like the cedars of Lebanon.
13 They will take root
in your house, LORD God,
and they will do well.
14 They will be like trees
that stay healthy and fruitful,
even when they are old.
15 And they will say about you,
“The LORD always does right! God is our mighty rock.”

Keep learning – a lazy brain is a decaying brain Keep loving – don’t be bitter Keep laughing – 😊 Keep leaving your past behind – don’t live in the rear-view mirror of your life Keep longing Keep dreaming about the future – it’s a matter of attitude Keep looking your best Keep laboring and working – there’s no retirement in the Bible Keep learning, depending, and trusting in the Lord Keep listening to God – to know His will and avoid temptation Keep having confidence for your life You …
Post a Comment
Read more